India is fast urbanizing and with such pace of urbanization comes unprecedented challenges for cities. As urban population rapidly increase, the need for additional infrastructure and services in urban areas put a severe strain on the capacities and resources of local governments. The problem is particularly severe in small and medium cities where lack of technical capacity, skilled manpower and own revenue sources prevent urban local governments from being able to effectively address these challenges.

Sulochana Thapar Foundation believes that by improving urban service delivery in small towns and promoting informed participation by citizens, local leaders and policy makers; a systemic transformation can be achieved, generating required value additions for improved quality of life in these towns. While the short-term focus is on building capacities for delivery of quality public services, the long-term goal is to economically empower urban local governments and harness their unique strengths to build a brand identity for themselves capable of independently attracting investments leading to inclusive growth.

AUIP was first launched in Kumhari, Chhattisgarh in 2012. The program was scaled to Konark and Pipli in Odisha, and Bhuj and Rapar in Gujarat in 2014. Dharamshala, Kullu and Shimla in Himachal Pradesh were added in 2015. As of 2017, the program has expanded to four more towns – Mapusa and Mormugao in Goa, and Bundi and Jhalawar in Rajasthan.

The Foundation also has its flagship Governance Fellowship program under which Fellows are placed with urban local governments in AUIP intervention towns for a period of two years. They are deputed with the Municipalities to support local governments with AUIP implementation, which also serves as their key learning resource during the Fellowship.

The Foundation has recently established a Centre for Effective Governance in collaboration with Lalit Mohan Thapar School of Management at Dera Bassi in Chandigarh to undertake action research on improving governance mechanisms. The Centre will also develop and deliver custom made capacity building programs for Municipal staff and elected representatives.

Scroll over the map to view program details 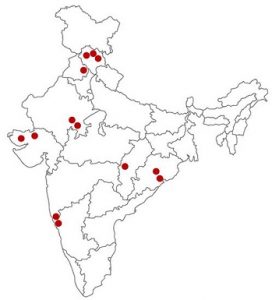