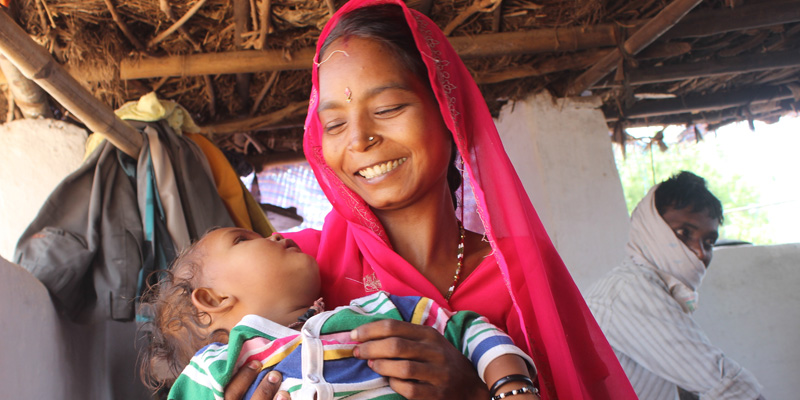 “When will you weigh my girl next?” asks Shobhna Mahaur, a resident of Hasanpur Haveli village in Sheopur, Madhya Pradesh. Baby Kavita was born to her and Shankar after 10 years of marriage. A proud and informed mother, she was anxious about her child’s nutrition status.

Shankar, a goat-trader earlier, met with an accident that deprived him of his livelihood. He suffered from Tuberculosislater, thus making him fully dependent on his brother. Shobhna worried about her husband’s ill health and family’s financial condition. Though their daughter was born with adequate weight, slowly her health began to fail as lack of supplementary feeding and childhood infections took their toll.Shobhna did not notice in the midst of her pressing concerns about husband’s health and family finances.

Kavita weighed only 5.4 kilograms when Sulochana Thapar Foundation’s child nutrition intervention in Sheopur first found her. She was then 10 months old and severely underweight. Shobhna was immediately informed that her child’s condition was serious as she was in the red zone

“Back then, all I knew was that my child was in danger of losing her life”, says Shobhna. “I was advised to take her to Sheopur and I did exactly so. After a short stay at the nutrition rehabilitation centre, I brought her back home and followed all the advice given by Mahendra bhaiyya, the project coordinator. I was determined to bring my child back to normal. Today, she weighs is 8.5 kilograms and is in the green zone.”

“Nowadays, I do not even wait for my turn.  When Mahendra bhaiyya comes to our village to weigh other children, I request him to weigh Kavita and he returns the favour without any hesitation”, says Shobhna with a smile.